Warning: Trying to access array offset on value of type bool in /home/forge/wisepiggy.com/public/wp-content/themes/responsifarm/single.php on line 22

The dream that was once considered the birthright of Americans — a lifelong career, a family, a nice house — is a dream deferred for many. Although median home prices are seeing double-digit growth in the areas that were hardest hit in the housing bust, seven years after the Great Recession began, many homeowners are still dealing with housing troubles.

So where are the homeowners with the biggest problems? WisePiggy.com has identified “The Sad 6”, the six states that have the highest rates of foreclosure, short sales, and underwater properties. Using current data provided to WisePiggy by RealtyTrac and Equifax, we conducted a careful analysis to see which states have still not recovered after hitting rock-bottom.

The data points WisePiggy focused on were: the states with the highest foreclosure rates, the highest percentage of underwater mortgages, and the states with the highest percentage of short-sale homes. RealtyTrac defines “seriously underwater” as “the combined loan amount secured by the property is at least 25 percent higher than the property’s estimated market value.” WisePiggy utilized a weighted average system to score each of the 50 states as well as the District of Columbia to rank the states. 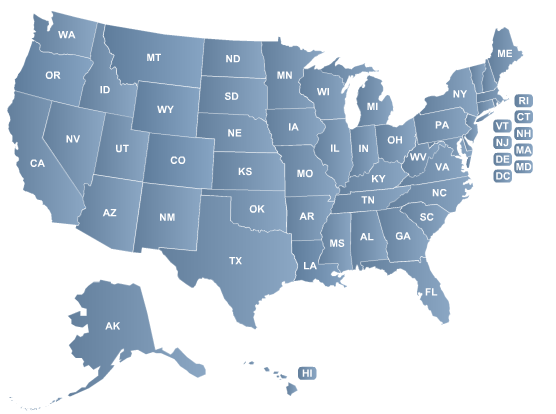 Here are the worst of them all:

Florida leads the nation with the highest rate of foreclosures … again. Although this statistic has been showing improvement over the recession years (in 2010 it was 1 in 17 homes), the number of homeowners continuing to face foreclosure is still incredibly high.

The most alarming statistic regarding Nevada’s housing market is certainly the percentage of homes that are seriously underwater. Refinancing an underwater mortgage is nearly impossible. Unless you are willing to take a serious hit to your investment and credit score and move forward with a short sale, foreclosure may be the only option. Nevada’s high underwater rate may foreshadow an increase in foreclosures in the coming months.

Illinois’s underwater problem is nearly as bad as Nevada’s. In January 2014, 32 percent of homes were categorized as “seriously underwater,” and in January 2013, it was 35 percent. The year-over-year decrease of underwater homes is a good sign; however, the change has not been rapid enough to avoid landing a spot in the top three worst housing markets in all of the U.S.

With neighbors Washington, D.C., and Virginia ranking No. 44 and No. 37, respectively, in our survey, it may be a surprise to find Maryland in the Sad 6, The data tell the tale: Maryland has the second highest rate of foreclosures in the nation, trailing Florida by only a small margin. The smaller percentage of underwater homes and short sales keeps Maryland from rising to the top three on our list of poor housing markets, but the overall market in Maryland is still glum.

The average home listing price in Ohio is approximately $116,100, according to Zillow.com, which makes the state one of the nation’s lowest cost areas to live in. The low cost of living blended with the above average foreclosure rate and high percentage of underwater mortgages paints a vivid picture of an economy struggling to overcome the recession. Unfortunately there doesn’t appear to be an end: RealtyTrac predicts Ohio’s foreclosure rate will increase in the coming months.

Delaware leads the nation in the shortest foreclosure process; its average foreclosure time frame is about 170 days. The quick process of foreclosure in the Diamond State may be the reason why the underwater mortgage percentage is relatively low for our top six.

On the flip side of the coin, there are many states within the United States where housing markets are shining. In fact, states like North Dakota only see one foreclosure in every 159,734 homes. If you haven’t checked out the map already here is a quick list of the Happy 6: The states with the best housing markets.

A Beginner’s Guide to Applying for a Mortgage

So you're ready to pull the trigger on what will (probably) be the biggest purchase of your life: a home. Or do you just think you're ready? There's a lot more to picking the perfect …

Is 30 Years Too Long for a Mortgage?

No matter how you cut it, 30 years is a very long time. Yet, even though this feels like a lifetime to some, the majority of home loans taken out in the United States are …

What to Expect at the Closing of Your Home Purchase

You've haggled over price and qualified for a mortgage, and now the only thing standing between you and your new home is the closing, where you'll sign the paperwork finalizing the deal. What should buyers expect …